Enchanting melodies of Jewish Eastern Europe, unique songs in Yiddish and their contemporary poetic versions, traditions and the present are all is combined in the impressive and original music by The Flying Rabbi!

The Flying Rabbi is an ensemble of five musicians playing klezmer. The basis of their music consists of traditional sound and an folklore approach, their aim is to play contemporary and timeless music. Their repertoire includes Eastern European Jewish wedding music intended both for dancing and listening as well as old and new songs in Yiddish and other languages, always full of unexpected influences and inspiration. They are a leading Czech klezmer band who are self-confident enough to develop the Jewish music tradition in our country of the 21st century.

The Flying Rabbi (founded in 2001) has given hundreds of concerts all over the Czech Republic and a number of them abroad (Europe, the USA, Africa).

Members of the Ensemble

He learned to play the clarinet in at the Prague Conservatory, Brno JAMU and Ostrava University. He is a member of the Moravian Philharmonic Orchestra. He also engages in old American jazz of the 1920s as a clarinettist and saxophonist of the Original Prague Syncopated Orchestra.

She plays the transverse flute and the small cimbalom in the band. As a dance master she is able to lead the audience of The Flying Rabbi who are eager to dance. Her liking for Moravian folk music sometimes emerges during evenings spent over a glass of wine.

This accordion player and the second band singer has a degree from the Philosophical Faculty of Palacky University in Olomouc. Besides klezmer he is fond of theatre. He is a literary manager in the Brno City Theatre, an actor of the Buranteatr and a teacher of acting at JAMU.

He is the singer of the band, he plays the violin and the mandolin and occasionally also the poyk (a march drum with a cymbal). He learned to play all his instruments on his own. He is the artistic manager of the band and the author of most of its Czech texts. He writes his own texts or translates texts from Yiddish and other languages. Besides The Flying Rabbi you can also hear him in a group called Pražská jidiš kapela.

He plays the double-bass and occasionally also F bass horn in the band. He works as a double-bass player and a sousaphonist in the Original Prague Syncopated Orchestra and in Pražská jidiš kapela. He also engages in experience pedagogy in the Zažito project. 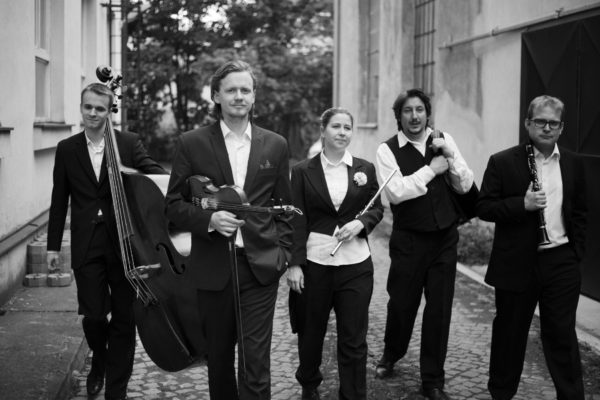 Klezmer (in Yiddish כּלי־זמיר, etymologically from Hebrew k’li zemer כליזמר, “a musical instrument”) is an instrumental folk music of Eastern European (Ashkenazi) Jews. Originally, the word was used directly for a musician – klezmer, and both in Eastern Europe and later in the USA it had a pejorative meaning. The klezmers preferred to be caller “muziker” – musicians. In the last third of the 20th century, along with a klezmer revival movement, the word started to relate to the whole music genre.

It is secular music, which, however, finds inspiration directly in the Jewish liturgical music tradition. The specific style of klezmer instrument playing is strongly influenced by the vocal techniques of singers singing in synagogues – hazzans – although (or maybe rather because) the music is purely instrumental (without singing). Even the scales (modes) used in klezmer compositions originated in the tradition of music played in synagogues. However, klezmer music is strongly influenced by the surrounding environment, and therefore we can discover in it certain traces of Ukrainian, Romanian, Greek and Ottoman music.

There are many other genres in the world of Jewish music – Hasidic melodies, folk and semi-folk songs in Yiddish, music of the Yiddish theatre, Yiddish songs of the Jewish proletariat and Jewish underworld, and many others. Most current bands that claim allegiance to the klezmer music tradition, including Létající rabín, find inspiration in all of those individual genres.

Klezmer music was intended for ritual purposes – for weddings, Purim, Rosh Hashanah, and other festivals. The klezmer repertoire consisted of various pieces that related to the individual parts of the festival or celebration; however, klezmers could also be booked to play for local non-Jewish noblemen and tycoons, especially due to their renowned musical skills. In such events, klezmers played their clients’ music, too, polkas or kolomyjkas or popular contemporary melodies and opera and operetta pieces. In the northern parts of Eastern Europe those musicians formed a kind of a caste of professional musicians. In the south, that caste consisted of Roma people. Both of these groups mingled in transitional areas, such as in Moldova, but klezmers played along with their non-Jewish neighbours in other areas, too.

However, not many klezmers achieved fame allowing them to do music as their only job. The musicians usually earned their living in a different way (they were barbers, tailors, shoemakers, etc.). Only genuine professionals, such as violinist Pedotser, could afford to establish great orchestras, which started to be popular especially in the second half of the 19th century. The musicians started to play music at an early age, and playing rhythmical and accompanying instruments they could gradually get to playing leading instruments, since they earned more playing those. The size of the klezmer ensemble at a wedding was a matter of prestige of the families involved, and therefore people used to say “Vi azoy di klezmer, ot azoy di khasene”, which means “The better the klezmer, the better the wedding.”

(A Jewish wedding from app. 18th century – klezmers on the left in the back, the band’s archive, author unknown)

(A Klezmer ensemble of the Szpilman family from Poland, the second half of the 19th century, a picture from http://www.yiddishbookcenter.org/exhibit/listen-stella-rudolph-play, author unknown)

(Naftule Brandwein, born in Galicia, emigrated to the USA in 1909 where he reached fame as a klezmer clarinettist, started his musical career as early as a child in his uncle’s band in Europe, a picture from http://www.last.fm/music/Naftule+Brandwein, author unknown)

(Di Naye Kapelye – one of the best European klezmer bands from Budapest, a picture from http://horinca.blogspot.com/2007/04/cimbaloms-attempt-to-take-over-my-life.html, taken by Christoph Giese)

The klezmer music tradition started in the original home of Ashkenazi Jews – central Europe – Germany, Bohemia, Moravia, Silesia and Austria. There, the musicians called themselves lejconim (sg. lejc). In the 16th century, however, they could predominantly be found in the Polish-Lithuanian Union, in Ukraine and later in Hungary, Romania and northern parts of the Ottoman Empire. Thus, the countries of present-day Belarus, Lithuania, Poland, Ukraine, Moldova, Romania, Hungary and Slovakia gave rise to klezmer music in the form in which we know it today. Nevertheless, in association with changes in the society of the second half of the 19th century, the world of Jewish shtetls – the home environment of klezmer musicians, who followed the fate of other inhabitants – their customers – perished – and they left, most of them for the USA. The Russian revolution and the world wars only brought the decline to a quick end.

In the USA klezmer music quickly adapted to the new environment, became more popular, but later lost its audience due to assimilation of the second generation of immigrants as klezmer was too old-fashioned and too ethnic for them (what also played an important role was the fact that only during World War II Jewish immigrants became fully accepted as a part of the “white” dominant culture; until then emigrants from Europe had viewed them like they viewed Asians or black people). In addition, the limiting technical capacity of recording facilities trimmed off the colourful compositions of klezmer music into three-minute commercial shellac records. In spite of that, the first two decades of the 20th century gave birth to the only sound recordings capturing musical finesses of klezmer musicians coming from Eastern Europe. An extensive digital archive of that repertoire is maintained by the Judaica Sound Archive, Florida Atlantic University. Recordings directly from Europe are not so frequent (worth mentioning is especially a collection of recordings of Belf’s Romanian Orchestra made before World War I), but we can still find considerable differences in those several pieces comparing to American versions as regards the style of playing. In spite of all those differences and imperfections, the American immigrant scene of the early 20th century gave klezmer all musicians who became teachers of the present-day klezmer musicians as well as a link to the tradition of the past. Thus, the USA still remains “Di goldene medine”, “the Golden Country”, which the country was for klezmers fleeing Europe one hundred or more years ago.

In relation to the issues of the social identity of approximately the third generation of the assimilated Jewish immigrants, the so-called klezmer revival emerged in the 1970s and returned to its very roots, first the American ones and later the European ones, and restored and innovated the klezmer tradition. The wave, having originated in the USA, gradually flooded the entire world including the Czech Republic. The original composition back in Europe consisted of bowed string instruments and a small cymbalom, various brass and wooden instruments were added later. The violin and the cymbalom, which were so typical of klezmer, were replaced with the clarinet at the end of the 19th century. The revival movement knows all of those forms of klezmer, and all of those modern musical instruments are used at present, too.

Klezmer still enjoys its strongest cultural background in the USA, and American klezmer musicians are undoubtedly the best of all, both in traditional and avant-garde production.   The Americans maintain this exclusive position for among other reasons their excellent achievements in scientific study of Jewish music in all its aspects. However, due to their cultural links, many of them operate, at least partly, in Europe (for instance Alan Bern, the accordionist of Brave Old World, and Joel Rubin, a leading clarinettist and a klezmer specialist).

Nowadays, klezmer is played all over the world in various forms. What is close to our heart is the approach of Bob Cohen of Di Naye Kapelye from Budapest, who understands playing klezmer as the “Noise of Identity”. In order to maintain its distinctiveness and remain klezmer at the same time, the personal identity of klezmer and the performer should be balanced with the musical basis. In this respect we are also fond of the music by Amit Weisberger from France and his colleagues, who repeatedly performed in the Czech Republic within workshops organised by our band for local musicians and audience. Such a skilful combination of their knowledge of the klezmer style and their personal experience always wins the attention and heart of every listener.